‘The Flying Stars of Sierra Leone’ – the GoFundMe campaign by multiple award-winning photographer TODD ANTONY for you on GoSee.NEWS is your chance to get an original print for little money !

Photographer Todd Antony traveled recently to Sierra Leone and photographed the Salone Flying Stars team on location. Impressed by the joy with which the boys played, he then started his GoFundMe campaign in order to provide all Flying Stars players throughout Sierra Leone with new sets of crutches and replacement ferrules (the hard rubber feet on the bottom of the crutches) – and hopefully, additional funding so that they can organize transportation between cities to enable matches between the different teams. The crutches are purchased in the UK and then shipped to Sierra Leone.

“As we were provoked, marginalized, insulted with all kinds of names, we formed this club to bring us together, as one family to share our feelings, especially to support our mental strength in our special living conditions and social recovery.” The Flying Star Amputees tell us.

Every donation is very welcome, but everyone who donates £150 or more receives a signed limited edition print from the series, which is then shipped to anywhere in the world – guaranteed. You’ll find further information on it below.

Todd Antony : “The last few years, these personal projects have taken me around the world shooting little known groups and subcultures that have an interesting or inspirational story behind them. Earlier this year, that took me to Sierra Leone to spend two weeks with the Flying Stars. The civil war in Sierra Leone (1991-2002) not only killed more than 50,000 people, it also led to thousands of innocent civilians having legs, arms or hands forcibly amputated by rebel soldiers. Or removed by landmines or bullets.

The Flying Star Amputees are a soccer team born out of the adversity of this war. All players are victims of civil war amputations, and soccer has brought them a level of joy, confidence, and hope for a better future for disabled people in Sierra Leone.

With no support from the government, the teams have no funding for things like crutches, ferrules (the hard rubber feet on the bottom of the crutches) or transportation to play matches with other disabled teams. Sierra Leone is the 6th poorest country in the world, and yet purchasing a set of crutches there costs 10-15 times more than in countries like the UK or US.”

Sierra Leone, officially Republic of Sierra Leone, is a country in West Africa, which borders to the north and east on Guinea, in the southeast on Liberia, and in the west on the Central Atlantic. The capitol and largest city of the country is Freetown. Following a decade of bloody civil war from 1991 to 2002, which cost tens of thousands of lives, the country is now busy reconstructing and processing its recent history. And you can help with a small contribution. 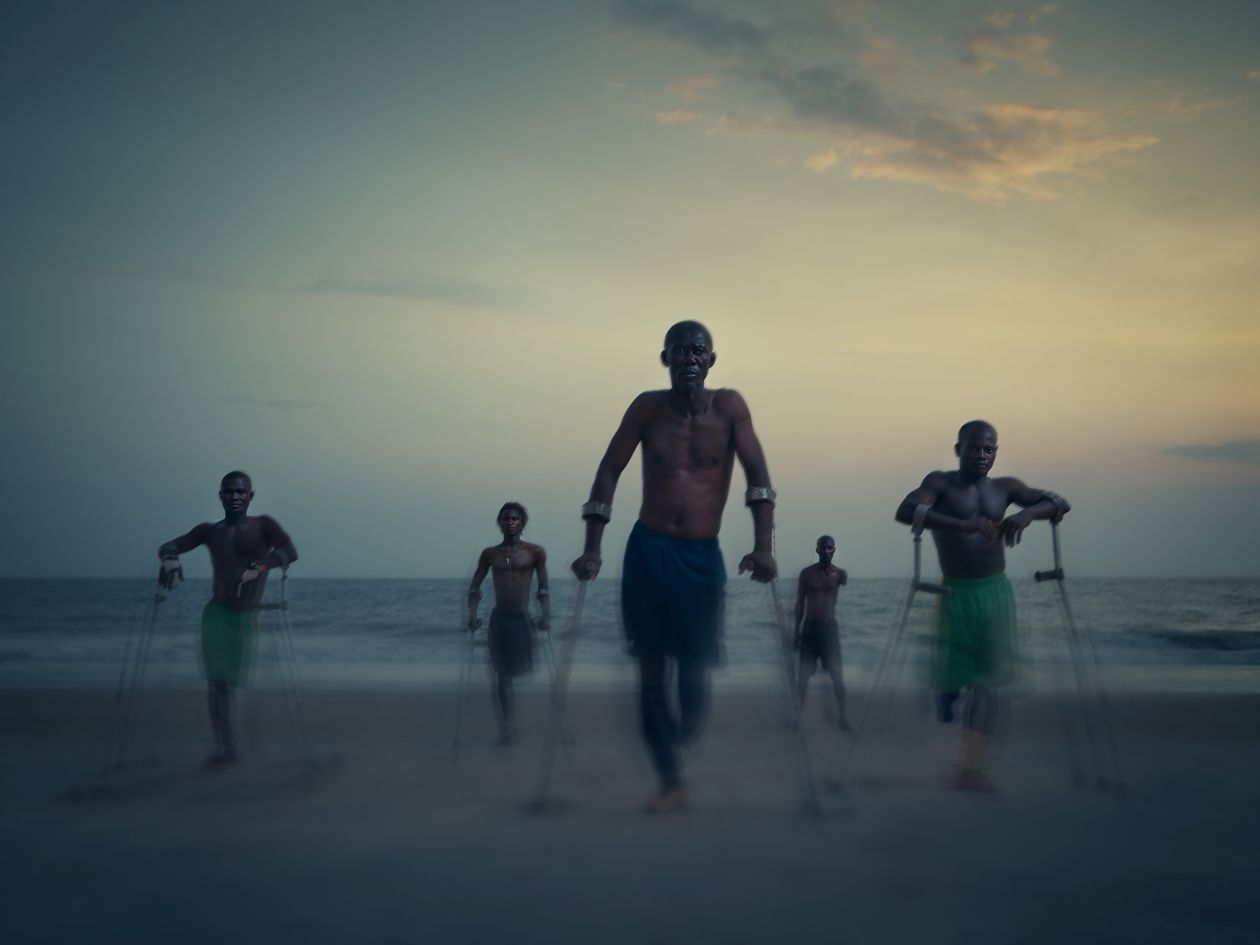 Age is wisdom and knowledge… TODD ANTONY has been celebrated at festivals and by the press for his wonderful project ‘The Sun City Poms’. This summer, a film came out about his project, which we, of course, just have to share with you. The photographer tells us : “Nestled away in the state of Arizona is the retirement community of Sun City. It is home to some 35,000 retirees, and playing a very active part of that community is a group called the Sun City Poms. A cheerleading troupe whose members range in age from 55 to 86 years old. Training twice a week and performing upwards of 40 times a year, they are the antidote to many peoples perceptions of aging.”

The Sun City Poms began in 1979 as a cheerleading group for the Sun City Saints’ women’s softball team. Since that time, the group has evolved from cheerleading into its structure today: a marching unit and a performing unit. The Sun City Poms are highly energetic performers who demonstrate the organization’s dance standards. Some even do acrobatics!

Members of the Sun City Poms come from all walks of life, and are more than entertainers. They represent the fulfillment of life at any age. Performing with the spunk and energy of their youths, these ladies are having the time of their lives while sharing positive aspects of retirement and aging, and shattering conventional images of senior citizens.
06.10.2020 show complete article

GoSeeAWARDS REPORTAGE WINNER 2019 : GOLD for Todd Antony and ‘Cholita Escaladoras’ – a reportage on Bolivia’s indigenous women and their struggle for equal rights

GoSee member TODD ANTONY thrilled the GoSeeAWARDS jurors with his reportage on the Bolivian cholita climbers ‘Cholita Escaladoras’ and received the most votes in the category REPORTAGE. Here’s the project for you once again.

“A new personal project on the ‘Climbing Cholitas’ or ‘Cholitas Escaladoras Bolivianas’. A group of Aymara indigenous women who are breaking stereotypes and shifting perceptions. In January of this year, they summited the 22,841ft peak of Mt Aconcagua – the highest mountain outside of Asia. And did so eschewing traditional climbing clothing in favor of their traditional, vibrant, billowing dresses, and using their traditional shawls to carry equipment rather than backpacks.

The word ‘Cholita’ has previously been used as a pejorative term for the indigenous Aymara women of Bolivia. But these woman are reclaiming it as a badge of honor.

In the very recent past, as little as 10 years ago, Bolivia’s indigenous Aymara women were socially ostracized and systematically marginalized. Known as ‘cholitas’, these women, easily identified by their wide skirts, braided hair and bowler hats, suffered racial discrimination and could be refused entry to certain restaurants, using public transport and entering certain public spaces such as the capitals central square, Plaza Murillo.

While these woman have been advocating for their rights since at least the 1960s, their movement was further invigorated by the 2005 election of Evo Morales. Bolivia’s first Amerindian president. Since then, the majority indigenous population have seen greater recognition and autonomy.” 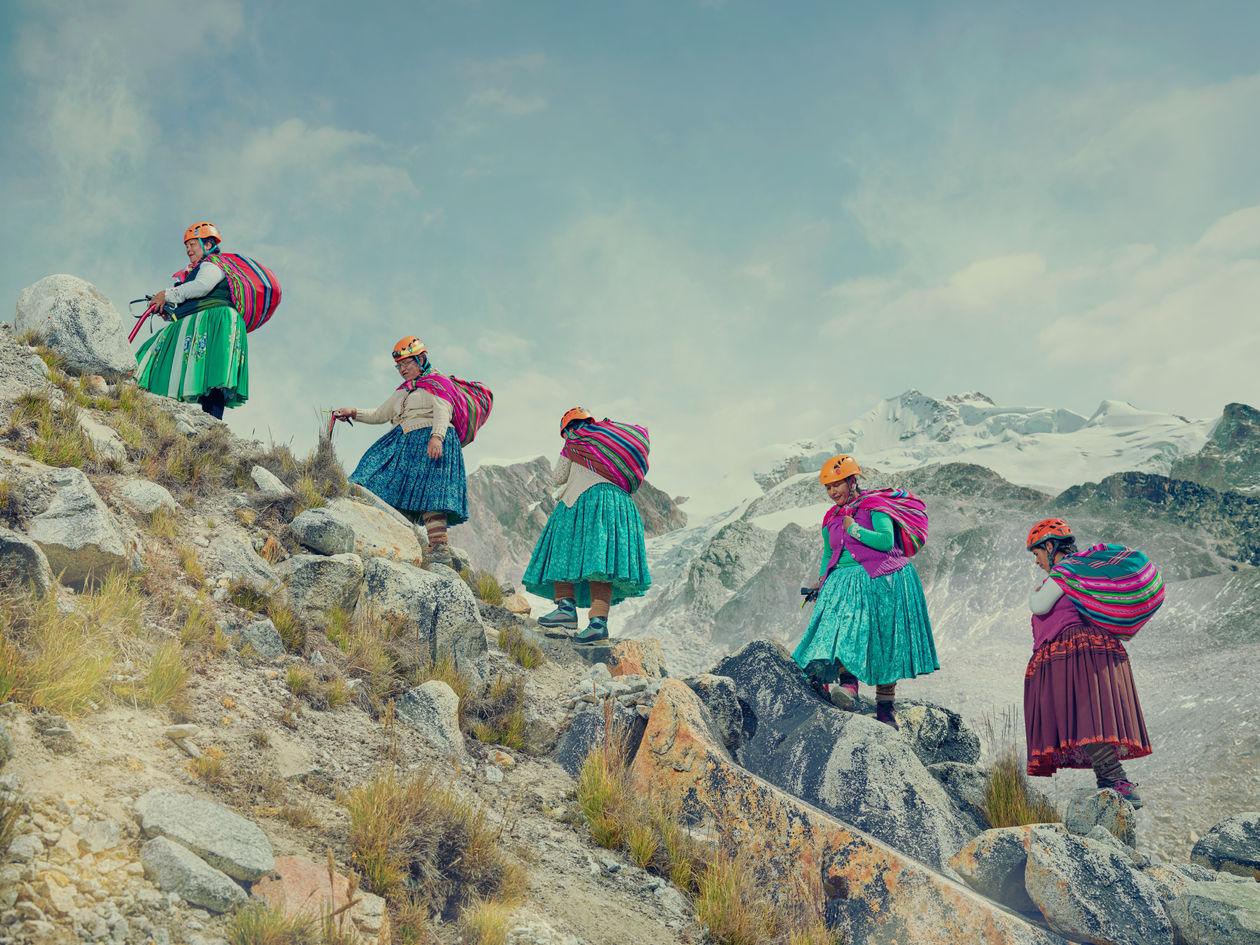